The Female Assessment/Analysis and Support Team (FAST), set up within UNIFIL’s Gender Affairs Office, is made up of 21 uniformed and civilian UNIFIL peacekeepers based across UNIFIL’s area of operations. Each member of the team is trained and on call to UNIFIL contingents to provide a female presence in culturally sensitive settings.

Within the first three weeks of launching FAST, there has been as many meetings between the FAST teams and groups of women residents in villages across southern Lebanon. The reception to FAST has been well received, according to UNIFIL’s Gender Affairs Office. 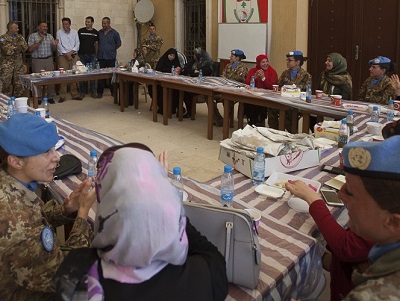 A UNIFIL Gender Affairs Officer, Rana Rahal, attended these first meetings, and said she is proud to be part of this initiative.
“Local women bonded with the female peacekeepers, expressed their concerns about safety issues, requested support on very small but important issues to them,” said Ms. Rahal. “Most importantly they expressed their satisfaction. One resident even commented that she “knows that UNIFIL leadership established FAST specifically for them.”

UNIFIL strives to be more gender inclusive. It is well documented that the visible presence of female peacekeepers makes missions more approachable to women living in the surrounding communities. The same goes for south Lebanon. Here women have reported “feeling more comfortable” to disclose or report culturally sensitive information or threats to other women peacekeepers.

Within UNIFIL, the overall percentage of uniformed female peacekeepers is only 3 per cent, but some battalions and military units have no women at all. FAST was specifically designed to counter this, and ensure a gender perspective can be always present, particularly on sensitive issues.

FAST will support, communicate and if necessary intervene on any given issue. The aim with the presence of FAST is twofold: Firstly, women in the community will have the opportunity to be consulted by a female UNIFIL peacekeeper, and secondly FAST will provide UNIFIL with a new more inclusive perspective on safety and security.

“These women care a lot about their country's future and they strongly want to be a part of it,” said an Italian UNIFIL Peacekeeper and FAST member, Major Valentina Floris, after attending one of the meetings. “We work where women suffered a lot, or where they feel inhibited, and we create a real opportunity to express their point of view and to contribute actively in the public life of their villages.”

In coordination with the Lebanese Armed Forces (LAF), the United Nations Interim Force in Lebanon (UNIFIL) today deployed a detachment of multinational force to Beirut in order to assist Lebanese authorities with their efforts to deal with the aftermath of the tragic 4 August explosions.

UNIFIL’s Sector East Headquarters organized a training on public information, encompassing various aspects of news production as well as media relations, for UNIFIL and Lebanese Army troops in its base in Ibil al-Saqi last week.

25 Sep 2020
On International Day of Peace, UNIFIL head calls for working to shape peace together

UNIFIL today marked the International Day of Peace during a ceremony at its headquarters in Naqoura, south Lebanon.